Explore how really big air pressure is with a device first made 368 years ago – the Magdeburg sphere. An inexpensive “toy” can defeat some very strong people trying to pull it apart after someone sucks out some air.

Equipment: “toy” Magdeburg sphere. You can buy one in cast iron for about $25.

Note: You can do this without a vacuum pump; with a pump you can make the effect stronger.

This goes back to a dramatic demonstration 368 years ago in the town of Magdeburg, Germany. The town mayor, Otto von Guericke, had invented an effective air pump. He used it to pump the air out of a sphere made of two halves joined with an air-tight gasket. He then showed that the pressure of normal air outside was so great that two teams of 15 horses each pulling on the two halves could not separate the sphere! The sphere was ½ meter in diameter, so the area of each half-sphere was about 0.2 square meters. If all the air had been pumped out, the force on each half would be 20,000 newtons, that of a 2,000 kilogram mass in Earth’s gravity. Multiply by two for the two halves. You get the same force as exerted by a 4,000 kilogram mass, about 8,800 pounds!

You can do this on a small scale with the “toy” Magdeburg sphere. Here’s a picture:

Clean the rims of both halves well and then apply some thick grease, ideally vacuum grease such as you get with the vacuum pump. Join the halves and now suck out the air. First trial: do this by mouth (take care re hygiene; only one person does this, or you wipe down the tube with alcohol each time). Open the valve, put the exit tube in your mouth, and suck the air out. Using “cheek power” you can readily pull a vacuum that’s about 1/3 of normal air pressure. Close the valve. On a sphere of 8 cm internal diameter, you have an area of both halves that’s about 100 square cm or 0.01 square meter. The force on the halves at 1/3 of air pressure difference between outside and inside is then about 0.33*100,000*0.01 newtons or 330 newtons. That’s the force exerted by a 33 kg weight, or about 70 pounds. Get two people to try to pull the sphere apart; there are handles. Some strong, older students might be able to exert enough force to do this. They’ll fall in opposite directions suddenly; do this on a safe, soft surface such as a lawn, or pea gravel as we have at our school. Now boost the demo: connect the exit tube to the vacuum tubing on the vacuum pump and pump the air out. Now the effective force is 3x greater, that of a 100 kg weight. No two people can pull the sphere apart while standing, or maybe even foot-to-foot lying down! 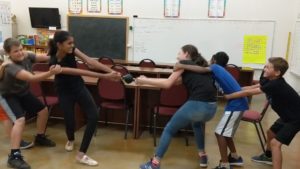