Hot = blue, cold = pink. How does that happen in a simple solution? The metal cobalt dissolved as an ion can take on different colors. It depends on which other ions surround it. We can change that by adding acid or adding water… and, surprisingly, just by warming or cooling a balanced solution. Get ready for some chemistry and a story about energy. 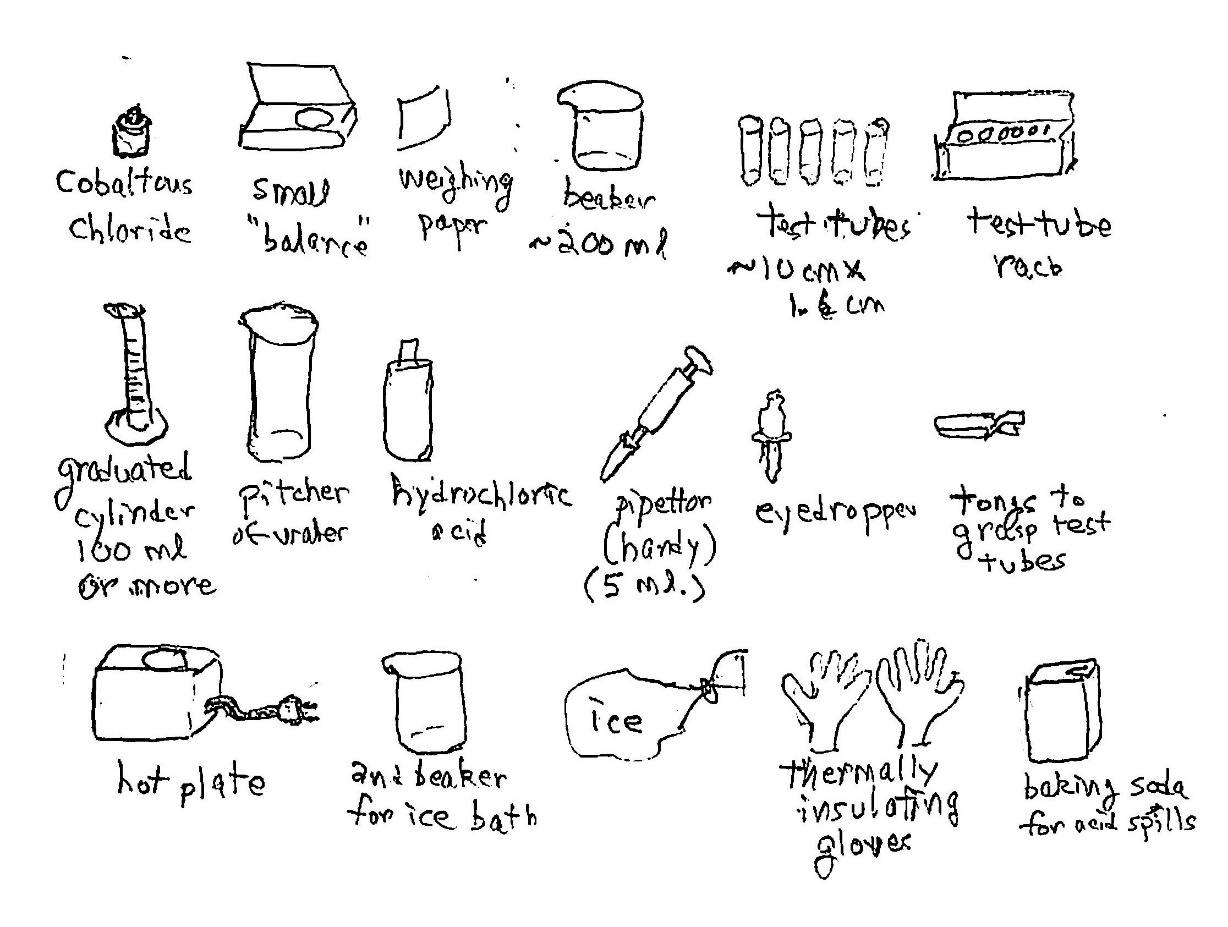 Costs: Labware is something you’d like for many demonstrations and experiments: small balance (properly called a magnetic force balance or scale; $20); weighing paper ($3; use smooth paper, in a pinch); beakers, in several sizes ($5 each); test tubes in one or more sizes ($1 each); test tube rack ($5); graduated cylinder ($10; get glass, not plastic); pipettor ($100, with tips; very useful; in this demo you can just pour carefully, but it’s tedious); tongs for test tubes ($2); hot plate ($80 or more; get a stirring hot plate and some Teflon-coated stir bars); thermally insulating gloves ($12)

Specific to this experiment: cobaltous chloride ($21 at Carolina Biological Supply for 100g, which is a lot)

Precautions: Cobalt compounds are toxic, so don’t expose yourself to them; they can be absorbed through the skin; use gloves. Hydrochloric acid is very corrosive, and the gaseous form of HCl is very noxious and can damage your lungs and eyes. Take care with the heated solution and especially with the hot plate. Have an acid neutralizer such as baking soda handy to take up acid spills.

Many chemicals have intriguing colors or beautiful colors. There’s the deep purple of solutions of potassium permanganate, the violet sheen of iodine crystals, the gold of iron pyrite. Most colors are unaffected by temperature, but here is a fascinating and instructive case.

The chemical state of metal atoms in solution: Most metals can be nicely dissolved, especially in acids. The atom of the metal loses one or more electrons, becoming a positive ion; one electron lost 🡪 singly charged ion, such as the sodium ion, Na+; two electrons lost 🡪 doubly charged ion, such as the ferrous ion, Fe2+, or, for this demo, the cobaltous ion, Co2+. Many metals have multiple possible state, including cobalt as the cobaltic ion, Co3+, which we’ll leave here.

We often look at metal ions in solution. They must be accompanied by positive ions of equal charge in the whole solution; it’s possible to calculate the force of electrical repulsion if the charges aren’t balanced, and in a tiny amount of solution the forces are akin to nuclear weapons. In aqueous (watery) solutions, the Co2+ ion gets surrounded by a number of atoms or molecules. Some are right on the ion, as things called ligands (“tied”) and others sit outside this coordination shell as counterions that balance the total electrical charge to zero.

We got all this stuff into solution by dissolving cobaltous chloride in water and then adding hydrochloric acid. We’ll play with which ligands, water or chloride, get preference around the cobalt, by adjusting the concentration of acid and the temperature. Cobaltous chloride comes with water attached, as CoCl2◦6H2O. We add hydrochloric acid, HCl, in the right amount to get the cobaltous ion poised between its two states. (Side note: hydrochloric acid is properly the solution of the gaseous molecule HCl in water, but we’ll use common shorthand.)

Making the solutions: Fill a graduated cylinder (tall container with volume markings) with pure water to the 40 milliliter (40 ml) mark. Pour it into an ordinary beaker (that’s the straight-sided cylindrical container with a pouring lip). Weigh out 4 grams of cobaltous chloride and add it to the water. You’ll get a rosy red solution. Label it as, say, Col2, for short, and also label it as toxic. [The 4g here would be enough to make an adult quite sick and could kill a very small child. As all organisms, we need cobalt in the form of vitamin B12 but a tiny excess is harmful.] Now measure out 60 ml of concentrated hydrochloric acid, CAREFULLY. HCl is dangerous and must be handled with great care. It is not simply an acid that can corrode things. The HCl gas coming off the acid solution is suffocating and quickly damaging to lungs, eyes, etc. Do not breathe near the solution. Add the HCl to the cobaltous chloride solution. You’ll get a nice violet solution. Divide this solution into 5 or more test tubes for a series of demonstrations.

Demo 1: Swapping water or chloride ligands for changing colors: Take two test tubes that each have some of the original solution. Drop water into one solution and swirl it well to mix after each drop. Keep adding water. At some point the solution will turn a definite pink. You’ve now created the water-complexed state as the dominant form. In the other tube add drops of HCl with mixing. It will eventually turn a definite blue, with cobalt in the chloride-complexed state. You can reverse the effects. Add HCl to the first tube and you’ll eventually get it to turn blue; add water to the second tube and you’ll get it to turn pink.

Demo 2: Balancing the complexes and pushing them to one side or the other with temperature: Fill a beaker with the original solution and add HCl dropwise with stirring until you get a nice intermediate violet color (if you overshoot, add a little water). This solution will be very sensitive to temperature. Divide it roughly equally into three test tubes. Prepare hot water, to boiling, in a beaker on a hot plate. Beware of getting your hands in the “steam” above the beaker. Also prepare ice water in another beaker, just by adding ice to water. Now place one test tube in the hot water, holding the tube with tongs or with waterproof thermally insulating gloves. It will turn blue, the color of the chloride-complexed cobaltous ion. Put another tube in the ice bath. It will turn pink, the color of the water-complexed cobaltous ion. Of course, you could do this with one tube, but it’s nice to see all three colors at the same time as a clear demonstration of the changes.

Move the cold tube to the hot water and the hot tube to the ice bath and they’ll both reverse their colors! You can keep reversing them.

What’s happening in demo 2: Both water molecules and chloride ions are hanging around the Co2+ ion in the solutions. Both bindings are happening all the time. At any constant temperature there will be a balance, an equilibrium with each state forming and breaking up. Which one dominates depends on the temperature. When chloride ions dominate, more energy is released as heat than when water molecules dominate. If we add heat by increasing the temperature we are counteracting the release of heat, pushing the balance or equilibrium back toward the original side. The counteraction of this chemical shift on the force or perturbation we apply is described as Le Chatelier’s Principle. We can look at the reversible process of changing which ligands are on cobalt as this balance or equilibrium:

The two-headed arrow indicates that both forward and backward changes occur.