I took radioactive technetium willingly? Yes, it’s a good diagnostic for blood flow around the heart, and not as risky as you might expect. It also makes for a dramatic display near a Geiger counter! Here’s the link for the story.

Radiation straight from the heart.  In 2017 I had a diagnostic procedure done, in which I exercised and then got injected with the radioactive element (radionuclide) technetium-99 metastable. The gamma rays came flying out of my body to create an image on a screen.  I was still radioactively “hot” hours later, as a Geiger counter showed.

The Tc-99 was chemically bound to a ligand that migrates preferentially to the heart. 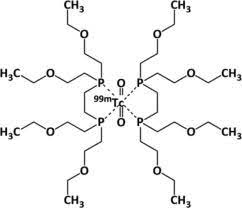 The idea was to map the blood vessels around my heart – all normal, as it turned out. I was exposed to many gamma rays but for a fairly short time; the Tc-99 has a half-life of 6 hours.  My total exposure was [let me find my notes again], a fraction of my normal dose from cosmic rays, internal potassium load, and other sources.  It was enough to increase my lifetime chance of cancer by 1%. Anyway, about 6 hours after the test I wanted to show how radioactive I was.  I put a Geiger counter I had built from a kit on a table and walked up to it, while taking a video.  I pegged the Geiger counter output when my chest reached it. Fortunately, not only does Tc-99 decay fast, but the gamma rays don’t deposit much radiation in my body on the way out; if they did do so, they’d make a too-fuzzy image.  Note that Tc-99 is made “on-site” in the doctor’s office.  He or she gets a device loaded with molybdenum-99 that’s decaying to the metastable state of Tc-99.  When a diagnostic dose is needed the Tc-99 is quickly separated out chemically and bound to a special chemical, the ligand.

Diagram of gammas escaping to be imaged