Green, green chlorophyll – it glows red (it fluoresces) and that’s a tell-tale for how active a green plant is…even across the globe seen from space. With an inexpensive violet laser pointer you can explore quite a bit about this very unusual molecule. Try this both inside the leaf and outside the leaf. Here’s the link for interesting times with green stuff.

Fluorescent color from chlorophyll, and a lot of insight into photosynthesis

Equipment and supplies: simple, fairly cheap ($12 to $40, depending on your kitchen holdings)

Chlorophyll captures red and blue light and gives off deeper red light, called fluorescence. There are several ways to see this, and one that’s now readily available at minimal cost is using a violet laser pointer. You can get a set of red, green, and violet laser pointers for about $12 online, say, at WalMart. Please see the note of caution about laser pointers at the end.

Here’s how it works. A few, select molecules such as chlorophyll and the pigments in “neon” markers and paints absorb one color of light and then emit some of that energy as light of a different color. Put simply:

* the light they absorb rearranges the electrons in the molecule into a higher energy state;

* the electrons can substantially reverse the process and emit light, which we call fluorescence. In almost all other kinds of molecules, this process is much, much slower than other processes that simply convert the electronic energy into heat; then, we don’t see energy coming out as light.

Chlorophyll is a wildly exceptional molecule in many ways that suit it to plants (and some bacteria) using it to capture the energy in light to transfer it finally to a chemical “factory” that runs a series of steps to store the energy in making stable compounds such as sugars. Its ability to fluoresce is a sideshow to its remarkable qualities that I touch on at the end here.

We can see chlorophyll fluoresce in its native state inside a leaf or else extracted from a leaf into a solvent; we can do both, readily. You need to get Chl (a handy abbreviation) to absorb light and then seen the emission of light. That emission is very, very fast, occurring in a few picoseconds, trillionths of a second. OK, Chl can absorb red light as from a red laser pointer and then emit slightly different red light… but we’re not able to shut off the red laser pointer and then see the red fluorescence, at least, not by eye!

The trick is to have Chl absorb light of a very different color, violet and then readily distinguish the red light coming with our eyes that are sensitive to many colors. Find a nice green leaf on a plant and shine the violet laser pointer onto it. Immediately you’ll see a pink glow where the laser light hits. You’re seeing the red fluorescence mixed with reflected violet light. To make the effect even clearer, place a piece of green paper or plastic next to the leaf; switch the position of the laser light between the leaf and the nonliving item. The contrast will be very clear. (You can use other colors of the nonliving item.)

Video for frames to grab – shining on leaf, then on green paper, then back again

Why does this work? Chl absorbs both red and blue, with blue including even violet (recall the colors that abut each other in the rainbow). Chl has then two different electronic states of higher energy or excited states. One absorbs blue and violet, the other absorbs red. The blue-absorbing state is called S­2­ or the Singlet excited state number 2, and the red one is called S1. The singlet designation is very interesting, concerning the spin of electrons, but we’ll skip that detail for now. It takes light of higher energy in the violet or blue to excite Chl to the S2 state. The S2 state turns into the S1 state with extreme rapidity, dumping the excess energy as heat.

Let’s talk a bit about energy in light. The color of light is tied to its energy content. Light actually consists of individual bits called photons that act as both waves and particles (an amazing property in quantum mechanics). Light is characterized by its wavelength, which can be measured in various ways. Violet light from the laser pointer has a wavelength of 405 nanometers or nm; it’s barely visible to humans. That’s less than one-hundredth of the diameter of a typical human hair. Red light has a longer wavelength of 640 nm, and much lower energy.

So, violet light hitting the leaf pushes chlorophyll molecules into the high-energy S2 state; that decays extremely rapidly to the S1 state, which then rapidly emits red fluorescent light. Not all of the Chl molecules turn the energy into light; the efficiency of fluorescence isn’t 100%.

We can, however, make it higher than in a leaf, by taking Chl out of the leaf into solution. Grind up a leaf with a good solvent that’s not watery (water, for one, knocks the central magnesium atom out of the molecule, turning into a drab and inactive pheophytin molecule). I have used various handy solvents, including ordinary alcohol (ethanol) in a very pure state (190 proof if sold for consumption), wood alcohol (methanol, harder to buy), or acetone (nail polish remover). Put the leaf and the solvent in some vessel in which you can grind vigorously. The solvent will turn a rewarding green color. Shine the violet laser light on this solution and the red fluorescence will be vivid! 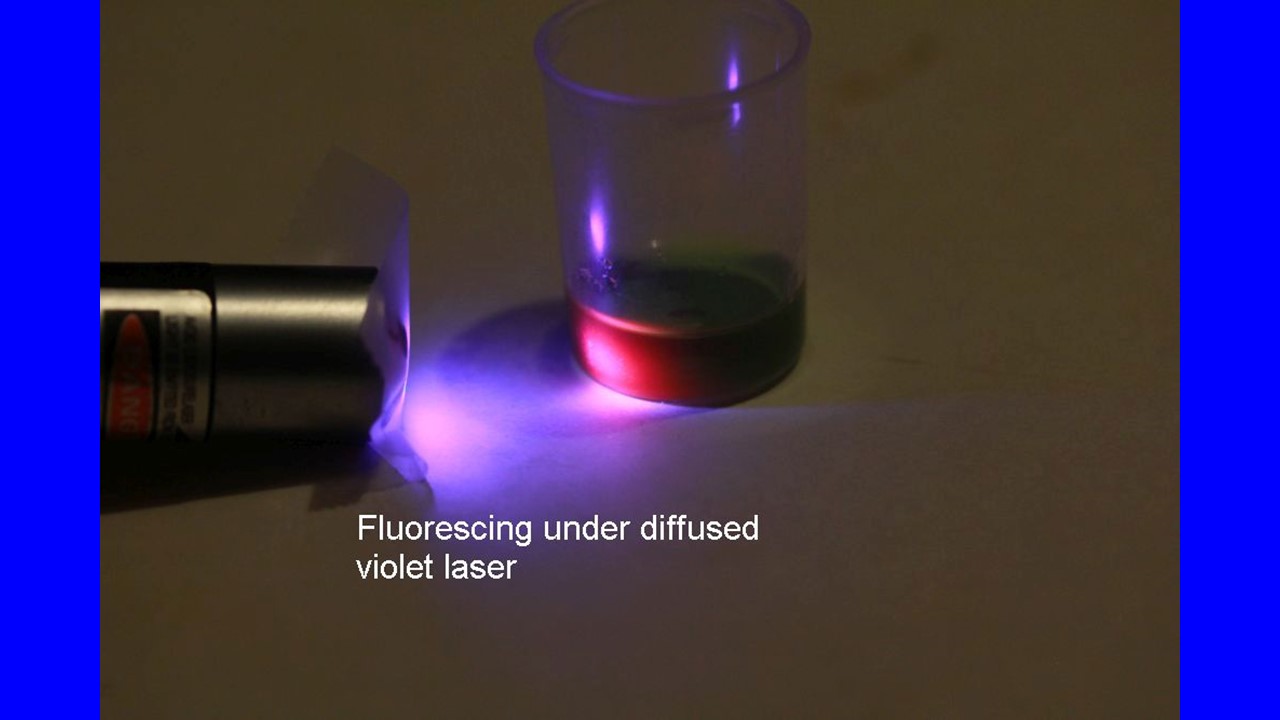 The fluorescence in solution is far stronger than in the leaf because it’s the main route for the Chl molecules to dispose of their energy. In contrast, in the leaf the energy can be almost fully delivered to the biochemistry of photosynthesis (an intricate and amazing story in itself). That brings up a great idea now implemented on several satellites, including the NASA Orbiting Carbon Observatory-2 (OCO-2) that views the whole Earth. The amount of fluorescence should drop when the plant is actively doing photosynthesis and rise when photosynthesis is cut back because the plant is stressed, such as by lack of water or extremes of temperature. Images from this satellite are now used to measure rates of photosynthesis and amounts of plant stress across the planet! 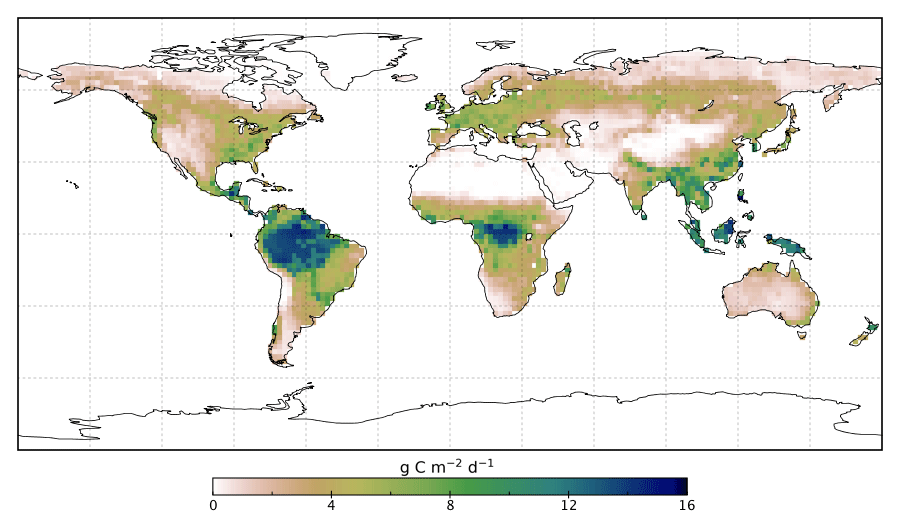 None of us has our own satellite to get data in a demo, though we can get the images and even the data. Let’s go back to what we have on hand. We’ve considered using the red and the violet laser pointers. There’s still a green laser pointer in the very inexpensive set. Can it tell us anything? Only indirectly. Chlorophyll doesn’t absorb green light; out of the red, green, and blue in sunlight it leaves the green, almost entirely. Leaves do have extra or auxiliary pigments to absorb a fair amount of the green light and pass some of that energy toward Chl molecules. Leaves can than absorb about 85% of the visible light from the Sun. To see this action, you might try using the green laser pointer while viewing the leaf through a filter that blocks green light. You can buy such filters at several places, including Edmund Scientific. You might see red fluorescence excited by a green laser pointer. Expect that this won’t work on a solution of chlorophyll, since you’ve lost some or most of the auxiliary pigments or put them in te wrong physical relation to the chlorophylls.

A note of caution: Of course, laser pointers are hazardous to your sight, as they are such concentrated sources of light. Don’t point them in your eye or anyone else’s eye. This is particularly dangerous with the green laser pointer. Green light is generated from far more intense infrared light by a process called frequency doubling. There’s a large amount of infrared light that can’t be converted, and that can really burn the eye.

I have another post/page that goes into more detail about why chlorophyll is such a magnificent molecule. Please check it out. This write-up is somewhat deep into the science, note.