Air, not air, and super-air: how does a candle burn in air, carbon dioxide, and pure oxygen? It’s easy to create these three different conditions and learn a bit of chemistry. If you have a vacuum chamber you can even fine tune the combustion.

Air that’s not air: extinguishing a candle, or …:

Equipment: a candle, and matches or a lighter to light it; a cup (optional) to put it into; another cup for mixing; baking soda; and vinegar. For an option you can also get some hydrogen peroxide and an old alkaline battery (cell).

How candles burn: Chemicals that allow burning of common fuels and chemicals that don’t: We light a candle and the flame on the wick heats up the wax around it, even making into vapors. Those vapors are composed of the elements carbon and hydrogen, both of which readily combine with oxygen when they are hot enough. (I put the chemical equation at the end, so as not to interrupt the narrative here.) Ordinary air has 21% oxygen when dry, 78% nitrogen, and 1% argon, a noble gas (very loath to react with any other chemical). Water vapor dilutes these a bit, up to about 6% in the most humid livable conditions for us humans. Candle wax, and most things we think of as combustible, don’t react with nitrogen in the air, but, hey, there’s enough oxygen for most fires that we want… and for our “controlled fires” in our bodies, our respiration that’s done with the help of many proteins in our cells. That’s another very detailed story that I won’t go into here.

Carbon dioxide is a gas that looks just like air, that is, transparent, invisible to the human eye, even if it’s extra-visible in the infrared that we can’t see. It’s present in ordinary air at generally low concentrations. Averaged around the globe it’s at about 415 parts per million in free air. In a closed room just our breathing may raise it to several percent; it had better not reach 10% or we can die from a few discrete effects on our bodies. Our breath is about 2% CO2. If we hold our breath we can get it to about 20% CO2, not a great idea to keep doing. CO2 does not support the burning of candle wax. In fact, it’s one of the final products of burning candle wax, the other part being water vapor.

The set-up: Basically, we can make pure CO2 readily by reacting common household chemicals, vinegar and baking soda. We can collect it in a cup and then pour it onto a candle. It can collect because it is denser that air and sits at the bottom of the cup. Its molecules weigh more (have a higher mass) than air molecules. So, light the candle. In a cup, say, a coffee cup, put some baking soda in it; use about ½ teaspoon; even ¼ tsp is enough if you’re careful. Slowly pour in about a tablespoon of vinegar. The mass will foam; don’t let it overflow. Let the bubbles pop. You might cover the cup with a piece of paper to avoid losing too much CO2 to air currents in the room. Now carefully hold the cup over the candle flame, safely high enough not to get burned or to burn your cup if it’s paper. Tilt the cup reasonably quickly to let the CO2 fall right onto the top of the candle flame. It will go out, because CO2 won’t support combustion.

Variations: First, put the candle into a cup that is, say, a few cm (an inch, plus) taller than the top of the wick. Instead of pouring the CO2 directly onto the wick, pour it into the cup that’s holding the candle. Do this slowly, so that the CO2 will rise as a layer. When the CO2 reaches the height of the wick the flame will go out. Of course, you won’t see the CO2 but you’ll see its effect when the candle flame goes out. Second, try adding more oxygen instead of replacing oxygen. There are several ways to do this, but BE CAREFUL. An easy one is to pour about 5 milliliters (a teaspoon) of common hydrogen peroxide solution into the mixing cup. Open a packet of dry yeast and sprinkle some into the hydrogen peroxide. The enzyme catalase in the yeast cells will cause a huge release of pure oxygen gas. Pour it onto the candle flame, very carefully – the flame will rise higher and hotter, so keep a decent distance above the flame. The rate of combustion increases with the concentration of oxygen, as this shows.

There’s a way to decrease the amount of oxygen available to the candle flame in any amount. We can put the candle into a vacuum chamber and slowly draw out the air. That demo is described in a bigger demo about using the vacuum chamber.

The chemical equations: For wax burning in the oxygen in the air: the chemical makeup of candle wax is closely CH2, in units all joined together into somewhat long chains. Let’s look at just one unit:

A couple of things: First, there’s that water on the side showing the results, or products of combustion. Second, note that I use what is called an improper fraction, in which the numerator is bigger than the denominator. That’s almost the universal practice in science. It’s so much easier and less prone to error than using two-part proper fractions such as 1-1/2, when you multiply or divide numbers. Third, the fraction is a fraction of “jillions” of molecules; there are no half molecules. The number of molecules in, say, 1 gram of wax (about 1/5 of a teaspoon) is greater than ten to the 21st power, the digit 1 followed by 20 zeroes. The number of oxygen molecules involved is much greater.

What’s happening with hydrogen peroxide? That’s H2O2 – water with an extra oxygen atom in each molecule. It’s prone to break up and give up that oxygen:

Elephant toothpaste: lotsa foam! Well, I’ve seen many elephants in the wild in Kenya, but I have to admit none was brushing his or her teeth. Still, here’s a dramatic generation of bubbles and foam from simple household items. The explanation leads to additional interesting concepts.

Equipment and supplies: hydrogen peroxide – regular home strength (3%) or super-duty hair-salon strength (20%); packaged yeast or compressed wet yeast (“cake yeast”); dish detergent; a tall cylinder such as a laboratory graduated cylinder, about 30 cm (1’) high and 4 cm wide (around 2”); a wide basin to catch the foam; for the follow-on experiments, a heat source (e.g., a microwave oven) and a cup to hold the yeast mix, an old alkaline cell, C or D size, side-cutters, and a small spoon.

Precautions: This is a pretty safe demo. If you proceed to the experiments with heat and with contents of an old battery (cell, really), take care to avoid getting scalded or cut.

Start with a demo, end with experiments. For the demo, put about 100 ml (around ½ cup, in old English units) of hydrogen peroxide into the cylinder. Add dish detergent and swirl the cylinder to mix it in. In a cup, put about 30 ml (2 Tbsp.) of warm – not hot – water, then add the yeast. Mix the yeast around and let it activate for a few minutes. You’ll get a thick-ish suspension of the yeast. Add it quickly to the peroxide/detergent! A rapid fountain of bubbles shoots up and over the top of the cylinder. Be sure to catch the overflow in a basin. 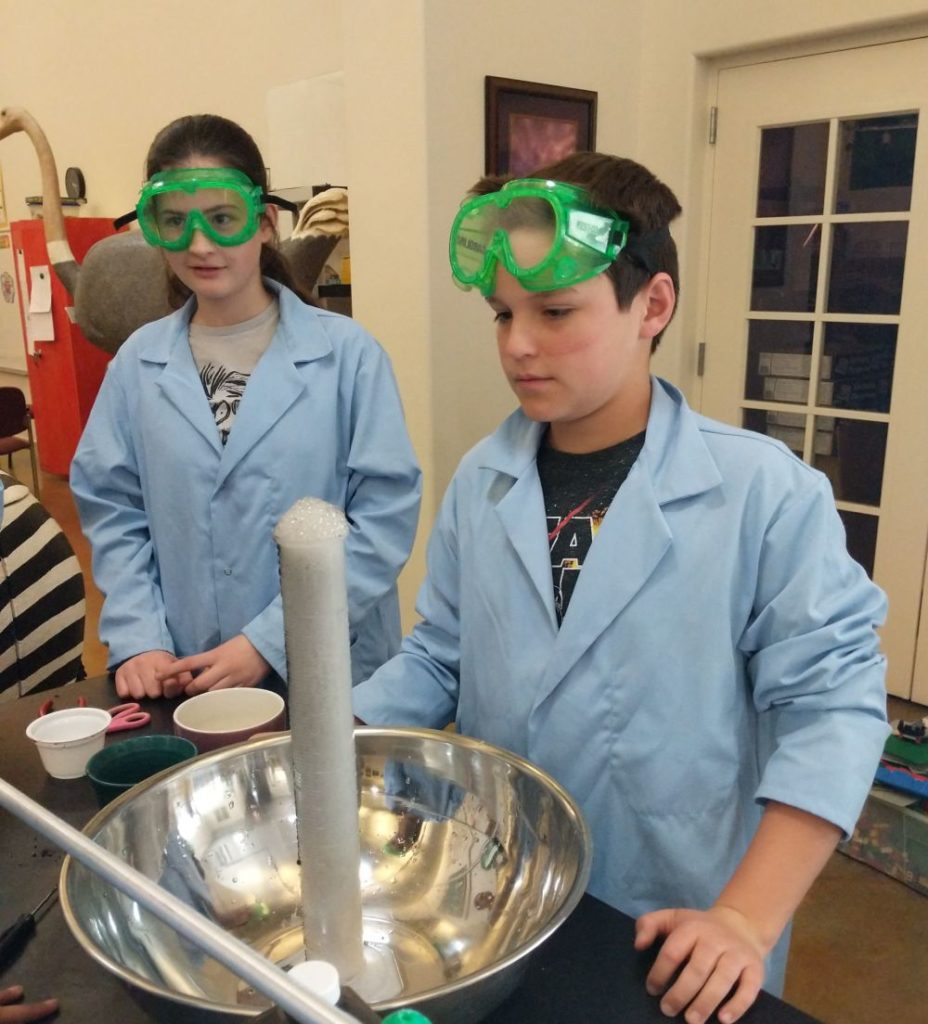 What happened? Yeast cells, as almost all living cells, have the extremely active enzyme, catalase, to protect them from oxygen in some of its dangerous forms. Start with the idea of a catalyst: it’s an item – a solid, a protein in solution, whatever – that increases the rate of a chemical reaction while ending up unchanged in the end. It participates in the “middle” of a chemical reaction but leaves it after speeding up the reaction. The cells in your body have several thousand different kinds of enzymes that catalyze almost every last chemical reaction that keeps you going. They not only speed the biochemical reactions but also control their rates, precisely. Catalysts occur all over the place. Gasoline is made from oil with the help of catalysts, precious metals on supporting structures. Ammonia as an agricultural fertilizer is made in quantities of more than 180 million tonnes (metric tons, 1000 kilograms each) every year, again using catalyst.

OK, why catalase, specifically? What’s the danger of oxygen? Many living cells such as our own use oxygen as the oxidizer to combine with fuels (sugars, fats, etc.) to release energy in controlled fashion. The process has a number of steps. At several steps, it’s possible to generate forms of oxygen that are potentially damaging to the other contents of the cell. One of these is peroxide, such as the hydrogen peroxide we added externally in this demo. A single molecule of catalase can break down almost 3 million molecules of hydrogen peroxide per second to water and normal gaseous oxygen. The reaction is written as

Variation: a second demo, or an experiment: Is catalase “alive”? OK, no chemical by itself is alive, only the whole set of chemicals in an intact cell or organism. However, what if the yeast cells are dead? Is catalase still active?

* You can experiment with ways to kill the yeast cells before adding them to the peroxide+detergent mix, or

As the demo: Let’s kill the yeast cells. They have no feeling, and you kill them in baking a yeast-raised bread or pastry, while the species lives on. One way to kill the cells is to heat them. After you make the yeast and water slurry, put the cup with them into the microwave and briefly boil them. Be careful not to have the slurry boil over. Let the slurry cool down so that the temperature is about the same as the first demo, to show that any changes in performance are not from temperature differences (learn to change one experimental variable at a time, if it’s possible). Add the slurry to a new peroxide+detergent mix. Does it foam really well? OK, if I don’t tell you what happens, it’s partly an experiment, beyond just a demo.

Variation: a third demo, or an experiment: Are there other things that can act as a catalyst to break down hydrogen peroxide quickly?

* You can experiment with them, trying them out, adding them to the peroxide+detergent mix.

As the demo: Let’s use manganese dioxide from an old alkaline cell (commonly called a battery, which is not really correct; batteries are made up of two or more cells). Cut into the cell with care not to cut yourself. I find it practical to use side-cutters (PICTURE), first, end-on to puncture the zinc wall, then in chewing motions to really open up the interior. The black sludge is manganese dioxide or some product of its reaction to make electricity. Scoop some out and mix it in water to make a slurry, as you did with yeast. Add the slurry to a new peroxide+detergent mix. Does it foam really well? Well, it foams, but far, far more slowly than with yeast. Nothing beats catalase as a catalyst for decomposing peroxide.