Let’s “see” thermal radiation, and see who’s (what’s) how or cold, and why. You’ll need a thermal imager that you can attach to your smartphone. It’s a bit expensive but it offers a lot of learning and even utility around the house to find heat or water “leaks.” Shiny metals and the clear sky both offer some real surprises.

The clear sky is so cold! Read temperatures at a distance, and with surprises.

Equipment: simple, except for one expensive infrared imager (ca. $400)

You can look at the temperature of things – your arm, a chair, a puddle of water, a piece of hot sunlit metal, even the sky. Here are two images we’ll look over in a bit: 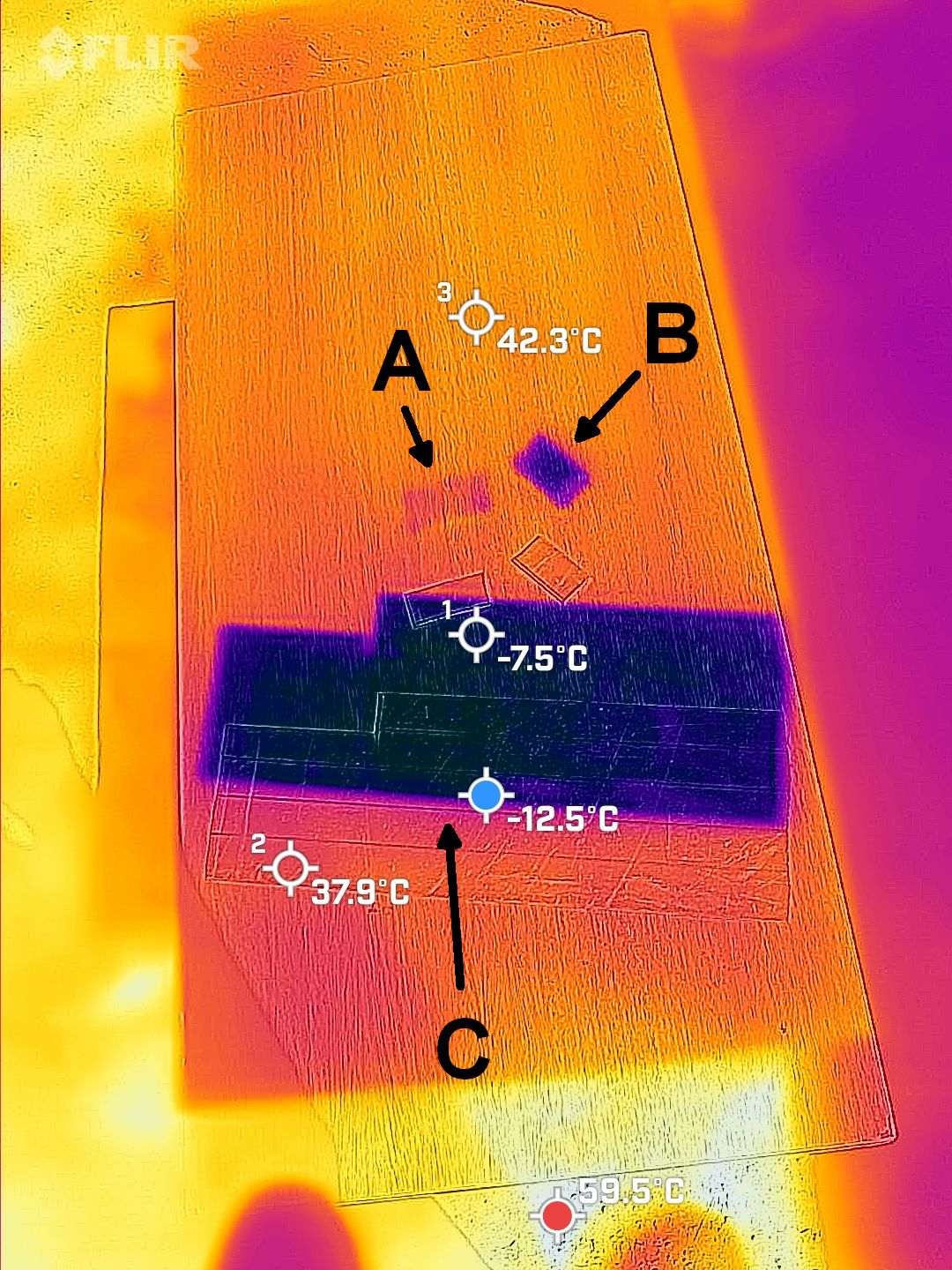 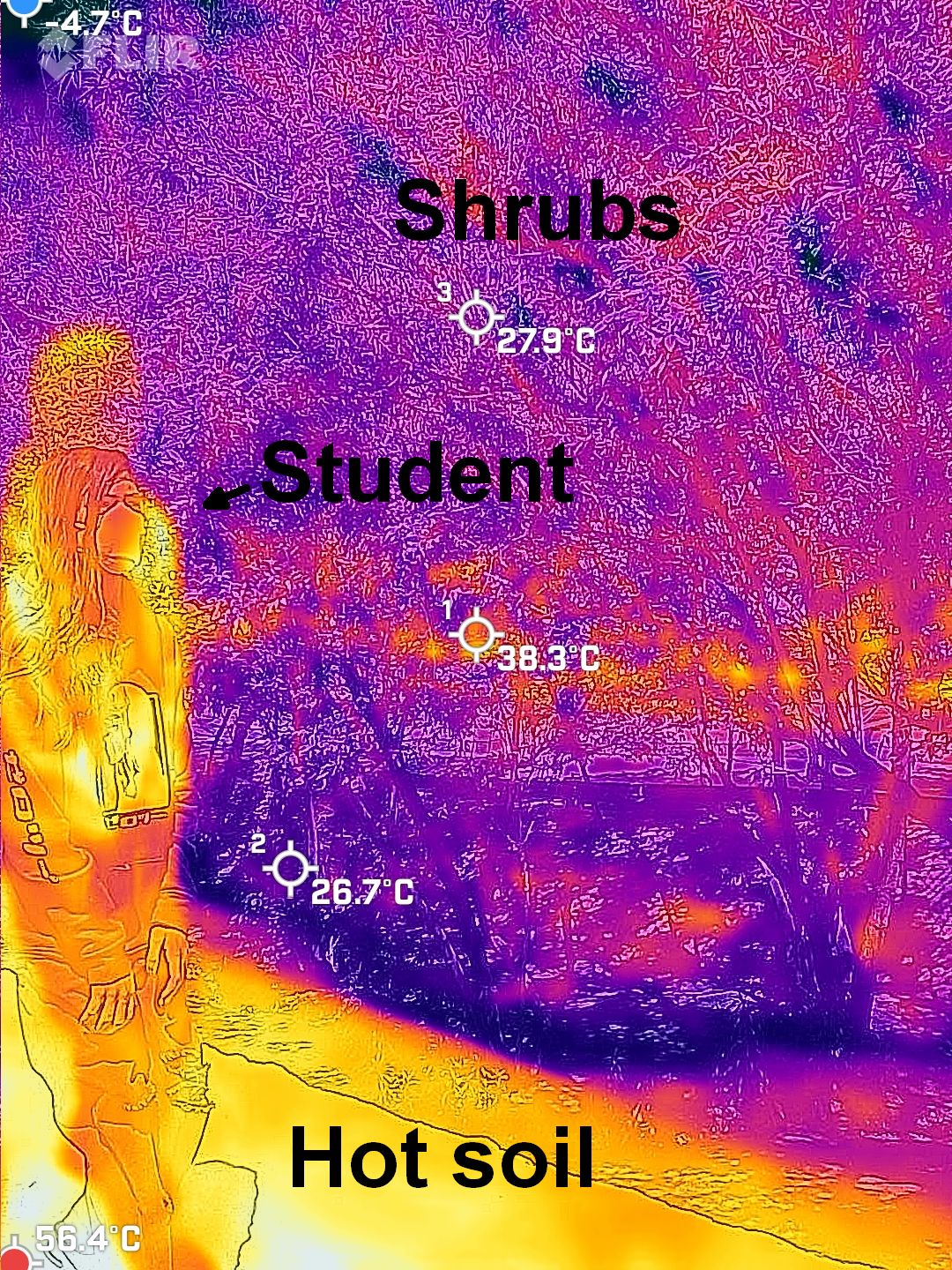 This is a demo that’s best done with a thermal imaging camera, not a common device, but you may find a scientist willing to do the demo. I have a FLIR ONE PRO, which is a small device that attaches to a smartphone, in this case, my Android phone. The FLIR has two imagers, one a standard light-sensitive camera and the other an array of 19,200 tiny bolometers that are sensitive to thermal radiation focused onto the array through a separate lens made of light-opaque germanium. The two imagers look at the same scene and are close enough to see overlapping images, one in the visible spectrum and one in the thermal infrared. The thermal infrared or TIR is a range of electromagnetic waves that are less energetic and of longer wavelength than ordinary light. Ordinary visible light is composed of waves with wavelengths of between 400 and 700 nm (nanometers, billionths of a meter), or about 1/100 the diameter of human hairs. Thermal infrared has much longer wavelengths; the FLIR captures waves between 8 and 15 μm (micrometers, millionths of a meter). That’s about 20 times longer than visible light, and carrying about 1/20th as much energy as sunlight’s particles of light or photons. That’s appropriate, since the energy of thermal motion at Earth’s conditions (a temperature of about 20°C or 68°F) is about 1/20th of that on the Sun, which is about 20 times hotter in absolute temperature (see below).

The core idea is that every object, even gases in the air, give off TIR at a rate that is proportional to the fourth power of their temperature on the absolute scale. The absolute scale is measured from absolute zero, where thermal motion stops (and only quantum mechanical zero-point motion remains – and interesting topic). Scientists use the Kelvin scale, which starts at -273.15 degrees Celsius; the freezing point of water on that scale is then +273.15 K (Kelvin, not degrees Kelvin). An increment of 1 K is the same as 1 degree Celsius (1°C). In the US (almost only the US!) people tend to use the ancient Fahrenheit scale, which we’ll peek at now and then. OK, let’s compare two bodies on Earth: a tree near you at 20°C or 68°F, and your face at a comfy 33°C (91.4°F). The absolute temperatures are 293.15 K and 306.15 K. The ratio of their fourth powers is (306.15/293.15) to the fourth power, which is 1.19 – that is, an area of your face gives off 19% more TIR than the same area of leaves. The FLIR detects these differences as signals that get converted to digital signals; the FLIR software processes these signals to temperatures that get presented as different colors. You can choose the color scale, with a common one being red for hot, through orange, yellow, green, to blue (as continuous hues or colors). That’s a nice picture each time. You can set the FLIR to present numerical values of the temperature at selected sites in the image.

There are some very amusing scenes to image, such as a person with hot, dark clothing and maybe a cool forehead just wiped with a wet towel and eyeglasses that stand out frames vs . lenses. I presented two scenes earlier that are also very informative. One is an image the includes a person, some shrubs, some soil, and a bit of sky. The person is warm, the sunlit soil is hot – it absorbs sunlight well and can’t shed heat very well to the air. The shrub stays cool as air flows well over its small leaves, taking away much heat deposited by sunlight. The sky looks cold, and it is. Let me explain. The air is at a mild temperature, about that of the shrubs, but air can’t radiate TIR well. The major gases, nitrogen and oxygen, are extremely poor radiators, for reasons that lie in the wonders of quantum mechanics. The only good radiator in the air is water vapor, and there isn’t much of it in the dry time that this picture was taken in Las Cruces, New Mexico (we are in the USA, though many people don’t know it). So, little TIR energy arrives at the FLIR thermal imager and it registers a low temperature. We often see sky “radiative temperatures” that are 40°C (72°F) below air temperature! There are interesting consequences. On a clear night we cool to the sky but get very little TIR back from the sky. Our bare heads feel colder than they “should.” This imbalance in radiation affects plants, too. On a night with air temperature just above freezing the plant’s leaves cool by radiation enough to get below freezing. That’s called a radiation frost. Farmers are well aware of it.

The second scene shows interesting properties of shiny metals such as the aluminum here. Those metals don’t absorb too much sunlight because they are so reflective in visible light. However, they do get very hot because they can’t unload that little heat energy very well; they have a low “thermal emissivity” or ability to emit TIR. Anyone who left a shiny tool in the sun knows the result! Shiny metas are about the only common objects that have this low emissivity. We can “trick” them into emitting TIR well by giving them a thin coat of something that emits TIR well. I coated one strip of aluminum with nail polish, and it stayed cool. Maybe backyard mechanics should buy some nail polish for their tools!

So, this is a long demo. You can make it into a series of real experimental tests if you think about it. Good luck.