Paper that burns in a flash before it hits the ground: making flash paper with care: Take paper that’s really pure wood fiber (cellulose); react it with nitric acid to replace parts of the molecules; wash it and dry it. Put a match to it and it disappears in a rapid flash, leaving no ash. Make a flaming paper airplane! Dangerous chemicals, but it can be done safely. Here’s the link to the story.

Paper that burns in a flash before it hits the ground: making flash paper with care: Take paper that’s really pure wood fiber (cellulose); react it with nitric acid to replace parts of the molecules; wash it and dry it. Put a match to it and it disappears in a rapid flash, leaving no ash. Make a flaming paper airplane! Dangerous chemicals, but it can be done safely.

Equipment and supplies: High-quality paper without clay sizing to make it shiny – that is, white paper towels; scissors to cut the paper towels; a graduated cylinder (100 ml capacity; $12) is handy to measure out the acids; concentrated sulfuric acid ($20-44, from a chemical supply house or, say, Carolina Biological Supply); concentrated nitric acid (ditto); 3 shallow glass bowls, about 15 cm (6”) diameter (kitchen bowls are OK; they will not be harmed); pitcher of water; plastic tongs to handle the treated paper; a watch to time the treatment; an acid-resistant surface on which to carry out the treatment; protective equipment – see below.

Precautions: Only an adult with a good knowledge of chemistry should run this demo. both of the acids are dangerous, sulfuric especially so; it will cause severe burns to your skin, even charring it. It will corrode many surfaces. Treat sulfuric acid with extreme respect. It also reacts vigorously with water. If you add water to concentrated H2SO4, the water will get so hot that it flashes to steam, spattering acid all over. Never add water to sulfuric acid; only add acid to water, with care. Nitric acid by itself is not quite as corrosive but it will turn your skin yellow quickly. The vapors of nitrogen dioxide above the acid are very corrosive and damaging to your nose and lungs. Don’t breathe near the open bottle of nitric acid. The combined sulfuric and nitric acid creates the nitronium ion, some of which appears in vapor above the mixture. Never breathe near the reaction bowls, and be sure to have good air circulation. The mix of acids creates the nasty nitronium ion that appears above the bowl. Prepare for accidental spills; have baking soda, or, better, commercial neutralizing powder on hand. Wear full protection – gloves, goggles, and a lab coat. Have water on hand in good quantities to wash off any acids. All this said, with care the treatment can be done safely.

What we’re doing: We’re going to alter the cellulose molecules with nitro groups NO2, as internal sources of oxygen (and nitrogen) for really fast combustion – so fast that the flame spreads internally at high speed, maybe one second to burn up a square of flash paper 6 cm (2.5”) on a side. The details of the chemistry are added at the end of this write-up, for those of you who want to know.

Preparing the flash paper, which we can call cellulose nitrate or nitrocellulose. Sounds a bit like trinitrotoluene (TNT) with that “nitro” in there, doesn’t it? It should; it’s also a possible explosive, but don’t worry; that won’t happen in open air. The effect is still surprising.

* Get all your protective gear on, and the same for onlookers.

* Set out 3 glass bowls and fill two with water.

* Have ready: the plastic tongs, a watch to time 2 or 3 minutes, and a bunch of paper towels that you’ll use to dry the treated papers.

* With tongs, slip a single square of paper towel into the acid mixture.

* Let it sit for 2 to 3 minutes, then use the tongs to take it out, letting the acid drip off as much as possible.

* Slip the treated paper into one of the bowls with water. Move it around for about 15 seconds.

* Move it to the second bowl and do the same. Now it should be pretty well rinsed of acid.

* Dry the paper square well between folds of a big square of paper towel.

* Remove it from the paper towel and let it air-dry.

* You can speed up the process with a hair dryer or a warm electric hot plate, but you may get a real surprise: it may flash into nothing before your eyes if you get it too hot, and “too hot” is still way below what sets ordinary paper to even charring.

The ignition: You can do this lots of ways. You can hold the flash paper with tongs or tweezers or whatever and light it at the far end of the square. The burning will be very fast. You can’t let it go from the tongs fast enough that it will hit the ground before it finishes burning. Like some magicians, I like to hold the flash paper by finger and thumb at a corner and then have someone with a match light the match and touch it to the far corner. I let it go as fast as I can and the paper finishes its yellow flash after it has dropped only a foot or so! Note that you can get a hot finger if you wait too long to let it go. However, the mass of burning matter is very small, so you are unlikely to get any notable burn. Be warned, however. I know how to do this, and you may find you need some practice after watching an expert. We’ve also folded the square into a tiny paper airplane. We’ve lit it from the front and thrown it forward as fast as possible. It makes a show that we’ve caught with a high-speed camera. The image is fuzzy, with very low spatial resolution. We made it with a Casio Exilim Z-10, alas, no longer made. It can do 1000 frames per second! Even 240 frames per second is good, if you get some SLR cameras or a Go-Pro.

Cellulose is a polymer of the ordinary sugar, glucose. That is, glucose molecules link up end-to-end with the elimination of a water molecule at each link, making a strong and stable molecule (so stable that only bacteria digest it; even cows need bacteria to do it for them). Cellulose can burn, as in a wood fire, but slowly. Lots of oxygen has to reach it from the air to carry out the full combustion reaction, and that’s rather slow compared to what we’re going to do. We can write the chemical formula for cellulose as (C6H10O5)n, where the ”n” means that it’s repeated “n” times; the number “n” is in the tens of thousands.

The “stick formula” for cellulose, which doesn’t show the real spatial orientations of the atoms but which shows who’s connected to whom is 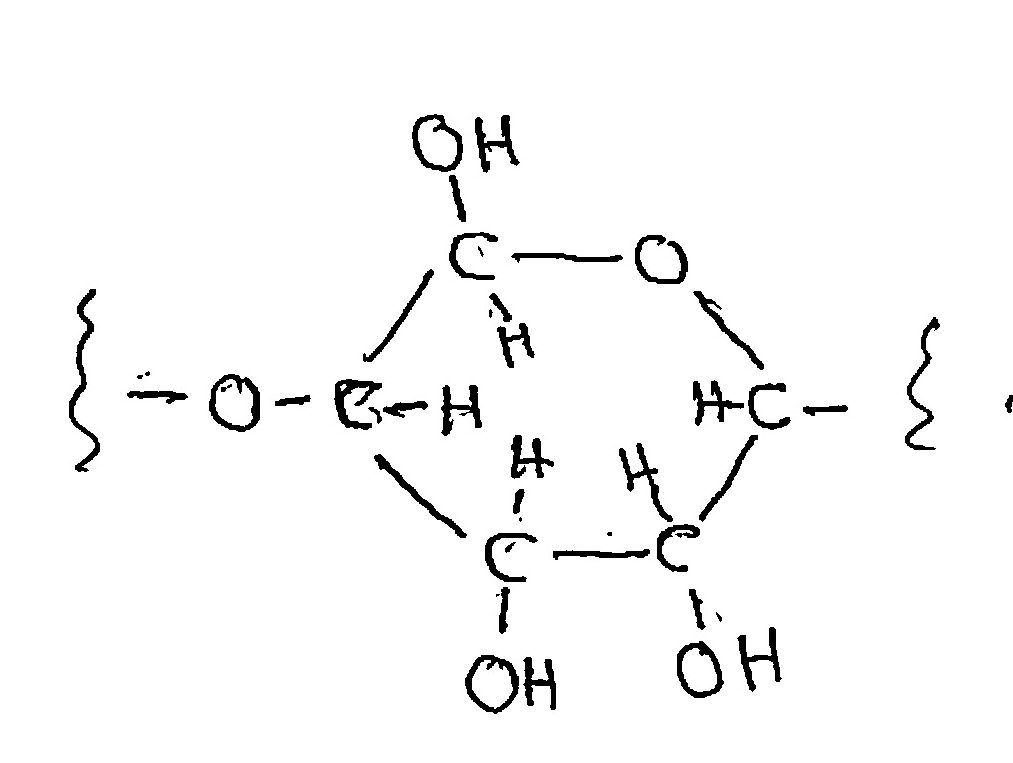 We’re replacing many or most of the hydroxyl (OH) groups sticking out, 3 per glucose, with nitro groups:

The reaction occurs at each OH group. Now we have a lot of oxygen in the molecule, plus some nitrogen, which also liberates a lot of energy in the final reaction. 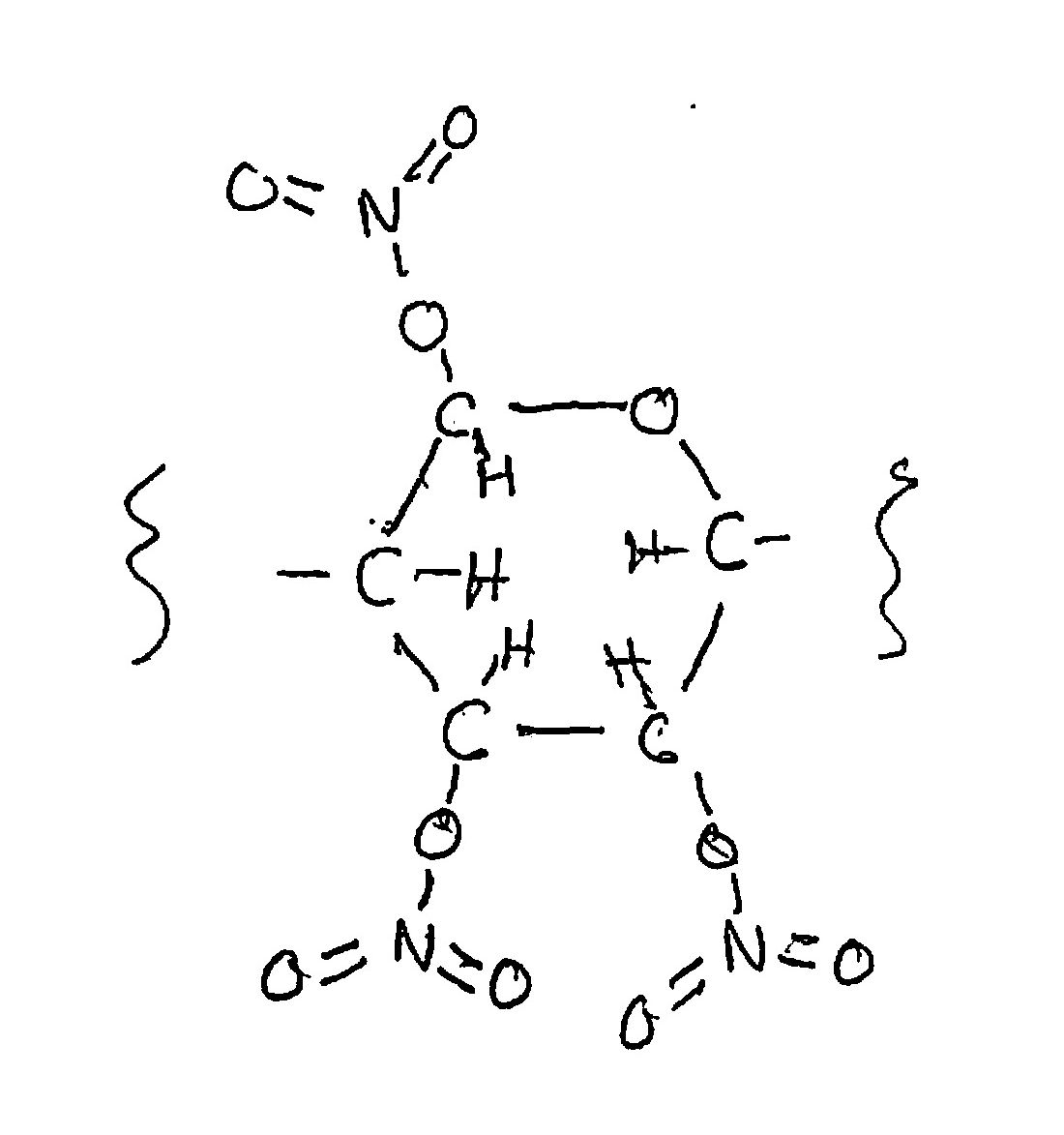 Hold on: the sulfuric acid doesn’t appear in the product. What is its role? Foremost, it strongly ties up the water molecules generated by the reaction of nitric acid. That prevents the water from accumulating and discouraging the continued liberation of more water. The very high acidity of sulfuric acid also activates the nitro group in nitric acid to chemically attack the hydroxyl groups of glucose.

Now the formula for its combustion can be written in two ways, though the reaction is some mixture of the two paths. If there’s lots of air with oxygen around, the carbons all burn to CO2 and the hydrogens all burn to water; that releases a lot of heat energy. The nitrogens combine with each other to make the strongly bonded N2 molecule, also releasing a lot of energy. We can write the reaction, per 4 units of glucose, as

If nitrocellulose (what we’ve made) combusts with no outside oxygen, there’s only partial oxidation of carbon to CO2, the rest ending as carbon monoxide, CO. That’s still a big energy-producer; the triple bond is the strongest bond in nature. The whole reaction looks something like

Reality is messier. We rarely get full conversion of the OH groups to nitro groups; the reaction of “self-combustion” will not go exactly to completion, possibly leaving minor chemical species, even H2. In any case, we get a fast reaction in air, and a real explosion in a closed container.