There are big ideas in circulation that have not yet entered policy discussions at high levels.  The physicochemical conditions for habitability of a planet have been discussed in the astrobiology community that examines exoplanets (outside our solar system) for evidence of life or the potential for life (see below for my analysis of a recent finding).  Only indirectly or sideways do the considerations tie to environmental policy – both exobiology and environmental policy share some topics, such as thermal adaptation of organisms.  Similarly, evolutionary medicine deals with the evolutionary “baggage” in our physiology and ecology that makes targeting of illnesses (infectious, environmental, or genetic) challenging.  Why do we as a species harbor sickle-cell anemia, or cystic fibrosis, or cancer susceptibilities, or genetic dispositions to schizophrenia or sociopathy?  Looking for simple fixes with focused treatments can be highly misleading.

On another level is the philosophy of science and technology as affecting their use.  Consider the widespread perception of a theory in science as a good guess rather than as a masterful edifice integrating vast areas of experiment and concepts, such as the theory of evolution, quantum theory, the theory of relativity, and classical electromagnetic theory.  Dismissal of the depth and breadth of a theory such as evolution leads to forgoing critical pragmatic action, such as preserving biodiversity.

Life on a Proxima Centauri b, a planet in the next solar system: 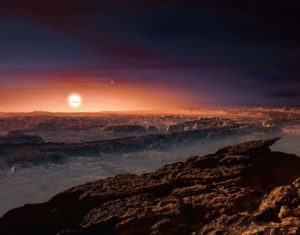 In the summer of 2016, a planet orbiting the nearby star (only 4.25 light-years away) was found by scientists using  theEuropean Southern Observatory’s High Accuracy Radial velocity Planet Searcher (HARPS).  An artist’s conception was presented in a report in Science (353: 857, 2016 – the image is from there). The planet is much smaller than our Earth, much closer to its star than we are to our Sun, but that star, Proxima Centauri b, is much cooler than our Sun.  Overall, the average temperature on the planet might be in the range for at least microbial life.  Let’s not fool ourselves.  As I show, the temperature and the flux of sunlight (“starlight”) is OK, but the killer, literally, is likely tidal locking: gravitational distortion may hold the  planet with one face toward the star.  Any atmosphere likely condensed on the cold side.  That’s only one of the problems.  Take a look.  Last September I wrote a short version, 2 pages,  and a long version, 16 pages.  The long version goes into details of the spectrum of starlight, energy balance on the planet’s surface, and how one measures distances to a star and a planet’s mass from telescopic observations.  Allow me to interject that the search for life on other planets has taken on a near-fanatical tone.  I may do a disservice to the work of many astrobiologists in saying that I’m suspicious of hyping the search for life as a way to keep funded for work mostly unrelated to biology, such as the geology and genesis of exoplanets…and bodies in our own Solar System.  There’s much uncritical thinking about sources of energy for life forms, even appeals to sources of impossibly low free energy levels such as heat from tidal flexing.  I’m much more focused on life on Earth, as long as it may last.

Next, a more detailed analysis, with less math and even more concepts: an analysis that highlights how extremely special the Earth is as a habitat for life. 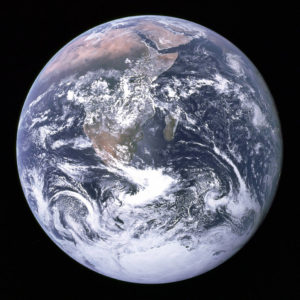 From Apollo 17, the Blue Marble

I consider the whole set of favorable and stabilizing conditions for life on Earth – a stable Sun, an orbit at the right distance and of minimal eccentricity, a rotational axis stabilized by a rather large moon, a good mix of chemical elements, their modest sorting into mantle and core, the luck of size and cooling rate and radionuclide content that gives us plate tectonics to renew the availability of critical elements, water vs. ammonia for a solvent and a moderate greenhouse gas, enough carbon (the only element making very complex chains and rings in molecules), lucky escape from near death of the planet from an early life form destroying the first greenhouse effect from methane, a Jovial (Jovian) planet to clear out most of the big bodies that could collide with us, a helpful pair of supernovae to give us heavier chemical elements but not another one since, and so on. Drake’s equation for the number of habitable planets in the Universe did not account for all these saving graces. The Earth is one in a (insert your favorite large number); there are no Earthlike planets within traveling distance! (The recent findings by the TRAPPIST consortium of a slew of pseudo-habitable planets at a distance of 39.5 light-years is one of planets that are (1) too far away to visit and (2) in much the same set of problems for life as Proxima Centauri b.) I prefer to use the knowledge of what really makes Earth habitable in order to keep it habitable….not that we can change our orbit, though we can change/are changing our greenhouse effect and also our ecological setup.

The PDF document here is a work in progress.  I’m working on visuals and some extra detail.